Adam Hill at the Marrambang Meeting 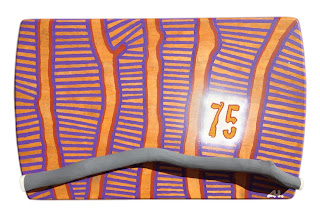 Goulburn was traditionally a Meeting Place for surrounding Aboriginal peoples. In this spirit, Adam Hill from Sydney, Peter Swain from Canberra and Perc Carter from Goulburn come together in an exhibition at the Goulburn Regional Art Gallery, NSW, of sculpture and 2D works including photography.

‘HALF’
General hearsay re the original inhabitants of Goulburn (according to local knowledge) states that ‘no one peoples presided within the local area’. However, the lands were apparently traversed by some dozen groups whom apparently met for ceremonies upon lands now occupied by significant icons. Sadly today, a significant population of the Indigenous peoples here is housed within one of the continents most notorious gaols.'

Coinciding with the ‘150th’ Celebration of ‘Australia’s first inland city’, this exhibition seems appropriate time to enlighten. At first glance when arriving or passing through Goulburn, one may be excused for noticing the absence of acknowledgement of cultural detail. Alarmingly, this is further emphasized when perusing the March / April Council Newsletter.

Granted, It is indeed commendable that Goulburn HAS adopted ‘Mulwaree’ (presumably the closest clans people within cooee) as part of the official title. However, the remainder of the newsletter- complete with two pages of pie graphs boasting economic expenditure seems a sad promotion of a community forged over one hundred & fifty years.

GREY
Upon the current ‘map of Aboriginal Australia’… the few areas across the continent that were NOT occupied by a language group per se, are conveniently coloured ‘GREY’. Goulburn however appears distinctly marked ‘Gundungurra’ (and coloured grey). Perhaps at time of printing, there existed uncertainty as well. Either way… grey seems an apt metaphorical colour defining ‘neutrality’.

PURPLE
The chosen logo featured to celebrate this festive occasion is a stylized Cathedral. Appropriate of course, given the enormity of the largest landmark within the CBD of Goulburn. The colour ‘purple’, the adopted colour of the dominant introduced denomination. I’ve therefore chosen to rely largely on purple as the basis of my installations within this show.

SEVENTY-FIVE
With such astute focus being placed on the numeric analysis, pertaining Goulburn Cities historic existence within the Colony, I’ve hypothesized my own mathematical equation. The timespan of the overall Colony arrives at two hundred & twenty – five years (225). The timespan of Goulburn- one hundred – fifty (150). Purely coincidental it may be, however… by subtracting 150 from 225 we arrive at ‘75’. Exactly half and sadly… the average life expectancy of an Aboriginal Female in ‘New South Wales’. That’s TEN YEARS less than the average female face featured upon the cover of the current newsletter.

CARDBOARD
Through no fault of our own… much withstanding history relative to Indigenous cultures has been / or is being recycled. Often then presented in the most ‘fashionable’ way possible. Urban ‘Dot Painting’ is a prime exemplar. I felt that by using salvaged cardboard often from ‘Plasma’ TV’s, this presented an interesting metaphor for such recycling of culture, and, the relative fragility of our remaining Indigenous cultures today.