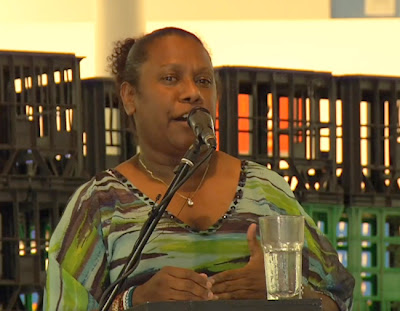 The exhibition commemorating the 20th anniversary of Paul Keating's Reconciliation Speech in Redfern Park featured Gail Mabo talking and reflecting on its significance.

It was a privilege to conceptualise and host this event.
We featured work by Papunya Tjupi, Adam Hill, Jason Wing, Susan Nakamarra Nelson and Will Coles.
The below section of the Keating Speech still resonates for all of Australia.

“It begins, I think, with that act of recognition.
Recognition that it was we who did the dispossessing.
We took the traditional lands and smashed the traditional way of life.
We brought the diseases. The alcohol.
We committed the murders.
We took the children from their mothers.
We practised discrimination and exclusion.
It was our ignorance and our prejudice.
And our failure to imagine these things being done to us.
With some noble exceptions, we failed to make the most basic human response and enter into their hearts and minds.
We failed to ask - how would I feel if this were done to me?
As a consequence, we failed to see that what we were doing degraded all of us.”
PAUL KEATING, 1992