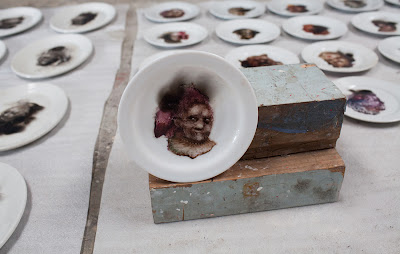 The idea of this exhibition started when I was reading the book by New York based musician David Byrne, well known for his role in the popular band Talking Heads.
Early in the book, ‘How Music Works’, Byrne articulates how the environment musicians find themselves helps shape and refine their creative output.
They are responding and reacting not only to the social and cultural moment but also the physical spaces that are available to them at the time.
In the early days Talking Heads performed at the now infamous New York club, CBGB.
It was a small bar …”there was little reverberation in those spaces and they weren’t that big … so the groove could be strong and upfront.  The details of one’s music would be heard and given the size of the place intimate gestures and expressions would be seen and appreciated as well, at least from the waist up”.
With that in mind it is interesting to transpose the same principle to the physical spaces artists currently engage with in order to create and nurture their practice.
Not so much the space they perform in, galleries, but the space where they are working, the studio.
The space where they are productive, converting a creative notion into a tangible form.
Everyone is fascinated with an artist studio, the romantic notion of a pool of creative unbridled expression.  Yet the hard yards of creation, destruction and resolution are determined in these spaces.
This exhibition WORKING|NEWCASTLE presents three new bodies of work by three contemporary artists who are WORKING in Newcastle.
PETER GARDINER
JAMES DRINKWATER
BRETT McMAHON
Accompanying the new work is a photo essay by artist
SIMONE DARCY
who visited the three spaces and responded to the three artists’ relationship with their space.
It is interesting to acknowledge the artists’ practice as WORK.
It is exasperating that even now, in the early part of the 21st century, there is still a notion in popular consciousness that the creative output of a visual artist is not WORK but something ephemeral and essentially ‘part time’.
This is a constant tussle having to be addressed by those in the visual arts industry: maintaining and promoting the role and worth of artists within the public domain.  The visual arts industry, especially those located in Australian regional areas, are consistently placed on a footing of justifying and defending, despite the centuries of cultural heritage easily accessible for all to see and experience.
The artwork in this exhibition is rich and varied, the space in which it was created is just as rich and worth describing, articulating, acknowledging.
JAMES DRINKWATER
James Drinkwater has recently moved into a new studio, an old glass factory in the West End of Newcastle.
Like a lot of young artists with limited financial capacity, James relies on contacts, intuition, inventiveness and resourcefulness.
“It’s a monumental run down Art Deco building and I’m in this great big mezzanine/loft at the back of the property. The windows were all boarded up which I had to address. A lot of the old glass racks are still there loaded with stunning pieces of antique glass. It’s a big dusty old space with high ceilings, untreated hardwood floors and big barn doors that open down onto a lane. I had to clean out all these relics and family heirlooms, which took a few days and then a few more to move my junk in. All that junk, hardwood, glass and dust is just glorious.
James and his artist wife, Lottie Consalvo, recently returned to Australia after two tough but rewarding years in Berlin.
“I have worked in many different spaces and each space has definitely informed that body of work. When I am between studios I make site-specific work, which is again informed by that place or space. The aesthetic and scale of the space I'm in now means I can be quite ambitious while smaller spaces in the past have required a more sensitive approach and controlled orientation. At the moment I can just storm around the place and compose things. I even like the idea of having not having a studio as such and simply use a city as your space and respond to that energy and space, you know like a major installation.”
Growing up in a typical East Cost Australia suburban environment, the garage, is one of the more enduring ‘creative’ spaces for young Australians, whether it be music, craft or the visual arts.

“I started my love affair with garages as a young boy. At about 10 I took over my parent’s garage as a studio and then in my teens I played in bands and we made a lot of noise in garages all over Newcastle. Most of my studios have been in garages or sheds; I've converted warehouses and tiny garages to live in. If you’re resourceful enough its incredible how much space is really out there. I made a decision a long ago to F..K the real estate agents, fuck the rental market, just look around and start conversations. You have to think one thing and say another.”
Having grown up in Newcastle he is well versed in the rhythm of the city.
“Newcastle is such a tramp, I love it. It has this fantastic gritty and tough side with this die hard little scene. I find it so appealing to live and work here. I spent quite a bit of time between Leipzig and Berlin and found it to be so aligned with the Newcastle and Sydney thing. You know Berlin is this big super fabulous art city but in reality slightly further east in Leipzig is where I found a far more authentic and strong scene. Its easy in Sydney like Berlin to get caught up in all that art world crap, its expensive and everybody is screwing everybody to get somewhere and there is all this pressure to be at the openings and parties which can be amusing on occasion but I just see people all the time with that 'fear of missing out' syndrome gallivanting around when they should just be in their studio focusing on making meaningful work. It’s always been those regional cities where great art and movements have come. It makes perfect sense to be here.”

PETER GARDINER
Peter is a mid career artist who grew up in Geelong, Victoria and arrived in Newcastle as a fresh visual arts undergraduate at Newcastle University.
He never left, and has carved out a professional art practice based in Newcastle.
His studio is located at his family home in inner suburban Newcastle.  Yet the studio where a lot of the preliminary work is done is ….
“… my head.  I take it to Woolworths and my son’s rugby on the weekends.
It’s a studio of endless possibilities, where anything can be realised, ideas fermented and weakness resolved.
My other studio is 7 x 4 metres with a high 4 metre ceiling. It is not as vast as the cerebral space, but it is a big enough to hammer things out.
This studio stands one metre from the side of my family home. I’ve always lived close to where I make art. It’s convenient.
I like to be close to my family. They love me. It’s good to be loved.
I work hard at my art. A friend who was much older than me, who I met at art school, told me that I must approach it like a real job,  ten hours minimum a day, two smokos and lunch.
Well I may not get 10 hours in, but I work everyday.  The rhythm is punctuated by coffee breaks until my kids come home from school in the afternoon and then the family forms its wagons into a circle for the night.
Sometimes I venture out to an arts related function, but not as often as I used to. I don’t leave me house much at all. I don’t need a lot of socialisation anymore. I’ve got what I need. The mix of domestic and the otherness of the studio pulses through my life.
It’s diurnal, the light of the interconnected domestile with the dark of the lone creation.”

BRETT McMAHON
Brett is a mid career painter with a national presence.
Having grown up in Newcastle, Brett has created his studio practice in Sydney, the Hunter Valley and the North Coast of NSW.
“My current studio in Newcastle is a space that I have leased for the past five years.
In Sydney, I had some great spaces in old rag trade buildings in Surry Hills, but they all required me to mediate my activity in regards to noise, process, scale of work.
The current space is located in an industrial estate so there is the freedom to work whenever I need, run equipment, make noise and mess.
It is also surrounded by other businesses and their activities are useful for supplying materials and expertise or for subject matter.
I grew up in Newcastle with my father, uncles and grandfathers’ all working in industry, so my thoughts and emotions related to making things are connected to that environment so I feel most comfortable positioning my activity in an industrial area.
I also like the sounds of production that you hear in working areas - it’s the most direct way I can tap into the deep feelings I had when I heard these sounds as a child.
The space also gives me the scope to work on whatever scale I need and to have several projects or processes going on at the same time.
Paintings can be pinned to the flat concrete walls to be painted, sprayed, scraped and sanded while paper works can be worked on in a separate area.
Things that need to dry and stay clean can be moved and not stop work on other pieces.
Another bonus is to be able to mock up exhibition installs.
The orchestration of the overall look of a show has always been important to me so to have the space to see how pieces work together (or don’t)is really helpful.

The studio itself is a standard concrete unit, concrete walls and floor with a big roller.
Functional, grey and rather sparse.
It is space that compels you to make things, to address its lack state.
High walls which I love – (though I always wonder what I’ll do if the light globes blow)!
In that way the studio and my work are in a dialogue that is becoming more interrelated.
In a broader context and out of the studio Newcastle works well at the moment – a town of industry near to a major commercial city, Sydney.  It gives you the best of both and keeps you at arms length from the distractions of the city and the machinations of the art scene.
Presently, Newcastle provides me with the subject matter to feed my work and the time and space to think and feel.
Other projects and places will become important in the future and the requirements of my studio practise will play a big part in where they take place and how successful the resulting work will be.”