JAMES DRINKWATER - NOSTALGIA FOR NOTHING 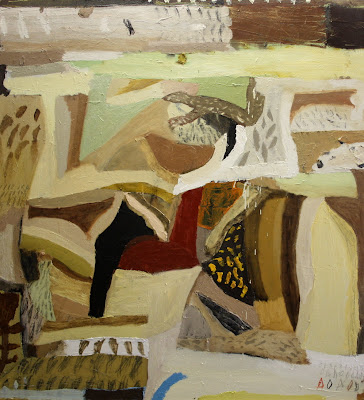 "He died from being an artist", oil on canvas, 1300mm x 1200mm, 2011.
Here he describes the process by which he develops his paintings and sculptures:
I start with long walks where I make photographs, drawings and I fill my trolley with found objects. I turn the photographs and drawings upside down or on their side or I leave them as they are depending on how I find the image most interesting.  I focus on the negative shapes and points of tension. I then begin to work on at least 15 paintings and a few found object ensembles ranging from small to quite large, splashing thin paint around and placing different objects next to one another I start to process my research and begin to make sense new ideas. Each painting receives many hits and with each hit the surface quality improves and my intentions become clearer. There is a lot of painting out and as the painting comes of age my moves and marks become more deliberate…full of intent like old men playing chess in a park. These final decisions made are arduous and quite often painful.
I have often described my paintings as incoherent mind maps. I am deeply connected and involved with the stunning details of life. I am an optimist, a naturalist, I am not an academic, my approach is raw, primal, however deliberate and emotional. For me its about those long and important hours painting, that is where I form a relationship with the work, that is where I form the dialogue. Like keys on a map I have this visual alphabet and visual words. The better works are lyrical however, more like a poem than a song. They all finish more or less at the same time like a dream or a film.
James Drinkwater
Nostalgia for Nothing
22 March - 16 April 2011
Posted by Damien Minton Gallery 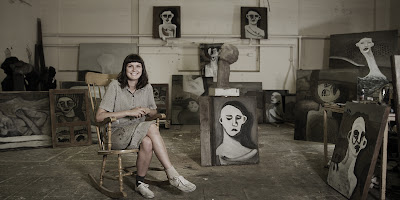 Dean Manning is currently exhibiting a suite of paintings, sculpture and video animation in the main space, each of which suggests a compelling narrative. "Midgets and Giants" offers evocative images full of whimsy and humour.
Here Dean tells the story of one of these works, Templo San Lazaro. 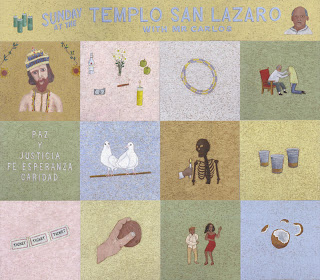 Templo San Lazaro, oil on wood, 680mm x 760mm, 2011.
I rented a warehouse in Bushwick, Brooklyn, NY for a few months. The neighbourhood is Hispanic & Mexican, On one of my daily walks I came across an old shop front cluttered with religious icons, amulets, potions, candles and white doves in cages.

Three men sat in the room watching an old movie on a small black & white t.v. That’s where I met Mr Carlos. He didn’t speak much English so his friend Rudy translated for us.

Mr Carlos came from Costa Rica 40 years ago. He is a healer and church leader and St Lazarus is his patron saint. He had a church in midtown Manhattan for 30 years with hundreds of followers but rising costs brought him to Bushwick. Mr Carlos led me to the back of the store to his church. It was a long skinny room with chairs lining the walls leading down to an altar with a life size statue of St Lazarus. From the ceiling hung a blue & cream satin banner that read ‘Paz Y Justicia Fe Esperanza Caridad’ (Peace & Justice, Hope, Faith & Charity). Mr Carlos’ church drew influences from all religions. Christianity, Buddhism, Voodooism, Native American. On the shelves packed with figurines, Jesus, Mary and an array of saints mixed it with Buddhas & cigarette smoking African effigies, Santa Clauses and Wild West Indians. Mr Carlos invited me to Sunday service that weekend. I was asked to bring a gift as it was a special day, St Lazarus’ birthday.

I coerced a couple of friends to join me and after a breakfast of huevos rancheros we set off. There were a dozen people there already and we took a seat. Everyone was chatting, laughing. We could have been on a bus heading for a holiday. A lady opposite spoke English and offered to explain the proceedings to us. Down at the altar, St Lazarus wore a happy birthday party hat. Around his neck hung a dozen strands of beads and garlands of flowers. I placed my gift, a quart of rum, in a basket overflowing with flowers, fruit, cigars, candles, copious other bottles and cash. Mr Carlos’ daughter, a young dark haired beauty in a tight black t-shirt sequinned ‘Chanel’ walked around the room giving each of us a strand of blue & yellow beads to wear.

When the room was nearly full the first stage of the service began. We formed an informal queue. Mr Carlos sat on a purple velvet throne next to the altar. Each person knelt before him. He threw a yellow shawl over us and murmured (or sung). This was said to cleanse us and clear the air. For the last throw of shawl, we were motioned to stand. Mr Carlos stood too, though somewhat painfully. (I learnt later he had a wooden leg). He then theatrically whipped away the shawl for the last time. Some people at this point flew into an ecstatic dance, eyes rolling. Assistants stood by to catch you if you fell which happened a few times.

We returned to our seats. I could hear the doves cooing in their cages as Mr Carlos’ wife walked around offering beer, shots of rum & soft drinks.

For the next part of the service we again filed before Mr Carlos who slowly moved a candle over each of us to ‘see’ inside and identify any aliments. These were relayed to us by his assistants. My friend Sarah was told she had a bad spirit lurking and needed to come back next week for further cleansing. I got a clean bill of health.

On the altar, wrapped in clear cellophane was a plaster sculpture of a native American scene of Indians and horses. This was this weeks’ prize in the raffle. They sold lottery tickets at 3 for a dollar.

In the final part of the ceremony we all selected a coconut from the sack ($2). One by one, Mr Carlos rubbed our coconut over us, back & front. The coconut was said to absorb all the bad energy. On our way home, we were instructed to find a ‘crossroad’ (an intersection in the city would do). It had to be a crossroad we wouldn’t be using that week. There we had to smash our coconut making an affirmation.

It was snowing outside. People lingered with their coconuts. The music was turned up and people began to dance. More drinks were served and a feast was laid out.


Dean Manning, "Midgets and Giants", 3 - 19 March 2011.
As part of Art Month Sydney.
Read their post on the Art Month blog.
Read Ian Shadwell's review of the exhibition on The Art Life.