It is an honour to be presenting two mature mid career artists tonight and delighted in the knowledge that both these bodies of work sit comfortably in the two rooms and will sustain a viewer’s attention for the next month in the gallery.

CHRIS CAPPER, in the Project Room, presents 11 new works that he started working on in 2007.


I recently became aware of a group called Slow Art where, (inspired by the slow food movement), guests are invited to sit in front of one masterpiece in a museum and whilst having a meal look and discuss only that one painting for a number of hours.

The slow peeling back of references, techniques, possibilities is something worth doing with any of Chris’ work.

When you stop and really look at Chris Capper paintings it becomes obvious they are not pictures depicting bunches of flowers, nor are they really about the refined balancing of figurative and abstract elements. They are all of those things and more.

So how do you then define the ‘more’?

I really enjoy my conversations with Chris and this afternoon we were both recalling how much we enjoyed the Simon Schama’s TV documentary on Mark Rothko last Sunday.

Schama was talking about one of the words Rothko most often used about his art; he was always concerned whether it was ‘poignant’, the inevitable passing of things.

All good artists spend a lifetime determined to trap their fugitive visions.

I wish I had Schama’s beautiful turn of phrase, but I will quote from him about Rothko as it will allow us to understand some of the reasoning behind Chris Capper’s art:

“It is impossible not to be touched by that poignancy: of our comings and goings, entrances and exits, womb, tomb and everything in between.”

Now we come to the main exhibition tonight, TONY TWIGG.

I realised only tonight that Tony exhibited at the Gary Anderson Gallery in 1985, so we are somewhat honoured to be passed on the baton of showing Tony’s art as Anderson is fondly remembered by many gathered here tonight as a seminal and influential aesthete.

This is Tony’s first exhibition in Sydney since 2004.

During that time he has embarked on a journey into Asia, where he has now become better known and respected in Kuala Lumpur, Singapore, Manila than here in his home town, Sydney.

It is not that surprising as Tony has found an audience which culturally accepts abstraction for what it is….it just is. Here with the inheritance of a western aesthetic we still searching for a narrative or conceptual springboard to deconstruct or construct the ‘real’ meaning.

When you view Tony’s work tonight, think of that journey.

Whilst walking on a journey you become aware of your breathing.

Air going into your body, air going out.

This is something intrinsic when viewing the series of work known as discs and accordions.

Some of the ‘shards’ and vertical sharp contract shoulder to shoulder into a tight visual space, breathing in.

Then others, offering the same design, breathe out, with the expanse of negative space allowing them to stretch out along the wall.

Breathe in and out.

When viewing Tony Twigg’s work you sense design within interiors, the architecture of built objects shaping environments and living spaces.

Breathe in and each work has a sense of collage, a collection of juxtaposed objects, lines, shapes.

Breathe out and each work has a feel of being a painting. The surfaces are treat with subtle variable tones soaking into the wooden plane.

Breathe in and each work becomes a drawing, the line of nature drifting and then pushing.

Breathe out and each work contains a history of the artist looking and observing for many, many years.

Look at the main sculpture Five Sticks, and your senses immediately trigger into non specific indigenous references, Tiwi pukamani poles, Javanese carvings and then our modern western tradition of Brancusi and Arp.

Twigg has spent a lifetime of inquiry and observation. This is evoked in the book we launch tonight, ‘Encountering the Object’ edited by Gina Fairley. Flicking through it alongside the substantial essays are images of Tony’s work sitting next to urban or rural photographs that echo the source and intent of the work.

Tonight we also congratulate and celebrate the contribution Gina Fairly, has made to Tony’s art practice. Since being in relationship with Gina there has been a shift in Twigg’s work, a calmness and repose echo in the lines and shapes.

When talking about Twigg’s journey we must also articulate his almost forensic research into the life and time of the artist Ian Fairweather in Asia.

From finding apartments he once stayed in; to landing on the beach where Fairweather’s raft was washed up, Twigg continues to make a valuable contribution to our knowledge of this great artist.

In return, Fairweather’s journey has allowed Tony to embark on his own quest as an Australian artist engaging in Asia.

As the exhibition title, Ricochet, suggests, you can see and feel this artist’s journey…..Kuala Lumpur, Manila, Singapore and now for the first time in many years, Sydney. 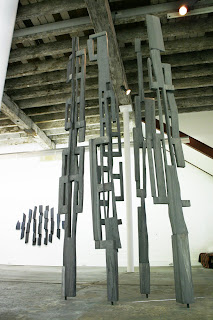