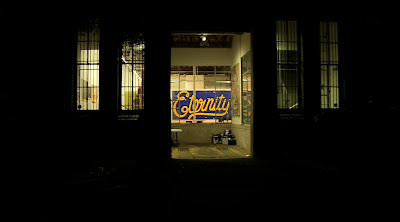 View a short film by Haydn Keenan, Smart Street Films, from the opening of the Eternity exhibition.

At the opening address of the Eternity exhibition I attempted to allude to the cultural importance of gallery spaces in Sydney.

Along with the early experiments of artist run spaces like The Yellow House there is a rich history of commercial galleries continuously nurturing artists, providing a sense of purpose for the artwork they produce.

They are more than just places of monetary exchange. Commercial galleries in Sydney have been vital in shaping the visual history of this city. They have been at the forefront of providing a safe place and outlet for the rich and varied eccentricities and passions of creative people; both artist and audience.

There is no doubt the commercial gallery scene world wide is experiencing a seismic shift as it deals with the changing nature of doing things in the digital age.

On one hand it is an exciting time working towards new unique and successful formulas, reinventing the 20th century format of white wall gallery spaces. Yet there is a concern the very tight paradigm is strangling a very genuine legacy.

It is a sentiment echoed in a recent essay by New York art critic Jerry Saltz in the on line magazine Vulture.

“Galleries are social space, collective séances, campfires where anyone can gather.”

Yet he has found in New York the majority of galleries at the moment are ‘eerily empty’, that the shift of emphasis into art fairs, auctions, biennales and the ‘push push’ of jpegs is eliminating the essential role of art gallerists to nurture, develop, curate and juxtapose.

“Shows go up and don’t seem to have consequence other than sales or no sales. Nothing builds off much else. Art can’t get traction.”

What is worse he declares is:
“A jadedness appears in people who aren’t jaded”.

Yet this is not a reactionary rant, it is an attempt to look at the reality of what is happening.

There is no “the” art world anymore. There have always been many art worlds, overlapping, ebbing around and through one another. Some are seen, others only gleaned, many ignored. “The” art world has become more of a virtual reality than an actual one, useful perhaps for conceptualizing in the abstract but otherwise illusory.

Once we adjust to that, we can work within the new reality. If the galleries are emptier, the limos gone, the art advisers taking meetings elsewhere, and the glitz offshore, the audience will have shrunk to something like it was well before the gigantic expansion of the art world. When I go to galleries, I now mainly see artists and a handful of committed diligent critics, collectors, curators, and the like. In this quiet environment, it may be possible for us to take back the conversation. Or at least have conversations. While the ultrarich will do their deals from 40,000 feet, we who are down at ground level will be engaging with the actual art—maybe not in Chelsea, where the rents are getting too high, but somewhere. That’s fine with me.”

Fine with me too Jerry!

Comin’ all the way from Redfern Sydney.
Posted by Damien Minton Gallery