THREE SELECTED FOR THE PLEIN ART

Congratulations to the finalists of the Plein Air Art Prize, 2010.

Three exhibiting artists, Tom Carment, Gabrielle Collins and Isabel Gomez, have been selected as finalists for the Plein Air Art Prize, this year judged by Anita Taylor, director of the National Art School.

The artworks are available for viewing at the NSW Parliament, Macquarie St, Sydney from 3 May - 3 June, 2010. 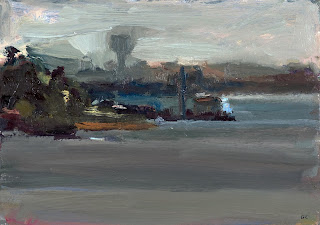 Gabrielle Collins
Harbour I
30cm x 21cm
oil on board 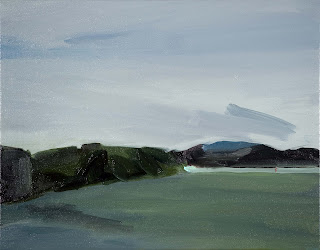 
AN EXCERPT FROM AN ESSAY IN THE BOOK
'TONY TWIGG, ENCOUNTERING THE OBJECT'

For Tony Twigg the journey (of his work) has been crucial in the way his work demonstrates an integrity of purpose over a long time, and in a very literal sense, namely his ceaseless travelling through Southeast Asia. But more interesting are the encounters along the way which have acted like lightning rods, moments of explosive concentrations of artistic insight, precipitating major shifts in the work. For Twigg, this movement has exposed him to culturally embedded visual experiences which helped him to make sense of what he had been trying to do before he began his travels.

With the timber constructions Twigg was aiming to create a single image that would stand for the entire story. 'I was looking,' he says, 'for a history that corresponded to an emotion... perhaps I didn't find it, but I found a city that did- Manila.' Living, working and exhibiting in Manila, the Australian narrative content was clearly no longer relevant, so Twigg abandoned the figurative element in his work and began working with abstraction. If this decision was triggered by a realisation that his earlier Australian narratives would not make sense to a Filipino audience, it was equally the result of his encounter with Filipino culture and beyond.

Twigg collects images as he moves through Asia, especially of the layering of materials such as bamboo on timber; that kind of arm wrestle between the organic and the urge to achieve some order. There is a tenuousness and provisionality about this built environment. Walls and fences are made up of loosely connected elements that seem to be permanently at the point of falling apart. The form, in other words, is a product of the materials at hand. In a similar way, Twigg's ovoid forms combine found eucalypt branches with off-cuts of milled timber in reductive compositions, which summarise his collected images.

Although Twigg abandoned figuration, the narrative and figurative hover fugitive and furtive in the background. The verticals have a 'portrait format' and we reads in heads, arms and legs. The are totemic in feel and conjure up visual memories of Cycladic art, Alberto Giacometti and David Smith. The ovoids, on the other hand, remind me of those transitional landscapes of Piet Mondrian, except that in Twigg's constructions the ovoid perimeters counteract the figurative.

Excerpt from Paul McGillick, "Material Encounter: The art of of Tony Twigg" published in
Tony Twigg: Encountering the Object, 2009.
Paul McGillick is Editor of Indesign and Habitus (Australia).

To view work from the exhibition TONY TWIGG: RICOCHET 28 APRIL TO 22 MAY 2010, CLICK HERE


A text message comes surging through from the Oxford Art Factory, Malcolm McLaren is dead.
Searching online over the last few days for stories on McLaren’s life a few things become really clear to me. If you want to make a difference in rock’n’roll go to art school.
Like so many others I have been entertained and influenced by McLaren’s antics, attitude and actions since 1977 when he was the manager of The Sex Pistols.
I recall attending his press conference at the Art Gallery of NSW when he was an invited ‘artist’ at the Sydney Biennale. Nothing much really happened, yet all who crashed the event absorbed the electricity generated by his physical presence.
It was his Svengali like weaving between art history and popular culture that will always captivate me.
“I didn’t create it (punk) alone or out of nothing.  Duchamp chose a urinal. I chose Johnny Rotten”, is a quote I read in The Times newspaper obituary.
He understood that the notion of challenging and unsettling the dominant idea of common sense, proper behaviour and logic was best achieved by having an appreciation of the past.
“I learnt all my politics and understanding of the world through the history of art. Plagiarism is what the world’s about. If you didn’t start seeing things and stealing because you were so inspired by them, you’d be stupid.”
When you read about McLaren’s history in the brilliant book, ‘England’s Dreaming, Sex Pistols and Punk Rock' by Jon Savage you get an idea of where McLaren got the notion to propel the Sex Pistols into more than just being a snotty arrogant rock’n’roll act.
McLaren has always been linked with the art movement in the sixties, the Situationist International.
Although formed in 1957, it was the galvanising times of the Paris uprising in 1968 that made these artists come into their own.
It was one of those crossroad events where political gesture and aesthetics became one.
The Situationists were interested in breaking down the divisions between individual art forms, to create situations; to construct encounters and stage lived moments in urban settings.
The art was disseminated through magazines, manifestos, broadsheets, montages, slogans and happenings.
“Demand the Impossible”
“Imagination is Seizing Power”
“Never work”
The playful techniques of challenging what is perceived to be ‘proper and right’ where taken up by McLaren in the punk days.
Having been to St Martin’s, Harrow and Goldsmith’s art schools McLaren was an activist on campus and part of an Situationist type group called King Mob who did things like dress up as Santa’s Claus, go into a department stores and start handing out toys for free to passing children.
Frivolous, stupid and harmless maybe, but the poignancy of the act is there, politics is in the everyday.
It is the sort of strategies and pranks I remember from the days of the Pistols, and beyond. He was at his best challenging assumptions and status, always manoeuvring himself into a position of causing trouble.
He once ran for Mayor in London on a manifesto that included selling alcohol in libraries.
A maverick that shall be missed, I think.
I’ll end with a McLaren quote I sourced online. He was talking about the author William Burroughs (but was really talking about himself!)
“I think all great artists are separated from ordinary artists by one thing. They are magicians. They are people who really change the culture. They have an alchemy that few of us possess and Burroughs was one of these.”
No quite, but I reckon Malcolm goes pretty close!
Posted by Damien Minton Gallery


DAMIEN MINTON AT THE OPENING OF THE STUART SPENCE EXHIBITION, ‘WHAT GIVES’ ON THE 6TH APRIL 2010

Welcome to the gallery this evening and we appreciate your support of the second solo exhibition at the gallery by artist Stuart Spence.

The first thing you will notice for those who came along last year is there is no Tim Freedman or Peter O’Doherty performing tonight, nor are there any MP3 players accompanying the images with a soundtrack.

It is purely and simply the artwork of Stuart Spence. The images stand proud and tall all by themselves, ready to judged on their own merit, which in my opinion consolidates Stuart as an artist rather than a photographer.

When you read or listen to Stuart talk about his work there are many analogies to music. Like Stuart, the explosion of music that occurred around 1977 to 1982/84 informed me. It was a time of enormous energy coming from the street and with it came an independent ‘do it yourself’ attitude.

What was important was the attitude, the passion. What was swept aside was the obsession with technical perfection, the overproduced, over embellished self-congratulatory rock genre that dominated the musical landscape at the time.

I think Stuart has reinvigorated for himself that ‘do it yourself’ stance with this show.

Every image has that Ramones ‘1,2,3,4’ feel to it. It is a desire to capture the moment, to consolidate a mood or potential narrative in a single frame. It isn’t forced or pushed; there is a sombre reflective nature to them. They are fleeting and could be gone with a single gush of wind.

One of our guests earlier tonight remarked in good humour that the photos are all out of focus. Quick off the mark his son fired back, ‘you’re so 20th century”.

Indeed, the art of making a photograph has changed dramatically in the last decade. Digital technology has dropped one industry of image making and replaced it with another that is based on manipulation and speed.

What I like about Stuart’s work is he messes with all of that.

The breaking up of the pixilation is deliberate and an attempt to merge form, shape, colour. It suggests a painter’s eye capturing the essence rather than a professional photographer’s desire for crisp detail.

He often describes his approach to his work as strumming on a guitar and ‘jamming’, mucking around. Sitting around and searching for riffs and melodies through the process of doing it. From the doing, something happens.

It shows the maturity of Stuart as an artist to be able to let go of all his maturity and depth of photographic knowledge.

He doesn’t force the issue but he is always ready to record that glance just out of reach.

It is about being wise enough to let the serendipitous moment occur.

The ease in which he constructs and frames the shot comes from years of practice and the subsequent cropping or colour shifts enhance rather than butcher the initial click.

It is refreshing to see a series of photographic images talk about serendipity rather than forced conceptual simulacra. We are constantly fed in the visual arts yet another wave of self referenced ‘cultural studied’ digital imagery which yet again falls flat back into its own two dimensional plane.

This exhibition, ‘What Gives’, is different to that. It is a series of images produced by a maturing artist who has the history and skill to let the images breath…and sing! So Stuart, congratulations from all of us on the exhibition. 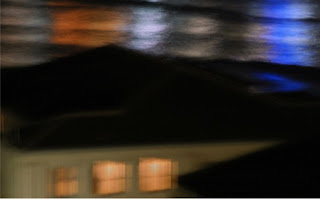